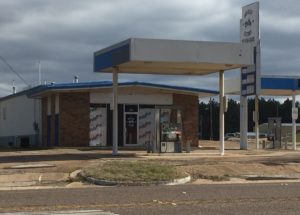 Businesses in Morris County sit idle after the downturn of the economy following the U.S Steel closure.

An 82-year-old African American woman described by many as reserved and soft-spoken, watched the economy in her hometown dwindle as U.S. Steel, one of Morris County’s leading employers shut down part of its Lone Star operation in 2016. Margine Mims, who grew up toward the end of the Great Depression, feared where her community could be heading. The ripple effect of the plant closing caused loss of revenue to a thriving rural community. With businesses closing and people losing their jobs and their healthcare, some worried that the community would begin to slide into despair and poverty. Mims opened her living room up to 20 concerned citizens with a dream for their community’s future. “I had been praying for an answer because of the devastation and decline of our community, and the answer finally came five years later,” Mims said. This small group of citizens eventually grew into the Morris County Collaborative, which was organized under the state of Texas in September 2018. There are currently 19 members on the board, with nine executive officers with Mrs. Mims being the Founding Director. These members represent the five communities that make up Morris County. Without the needed skills, knowledge or resources, Mims turned for assistance to Beverly Austin, business adviser at the Small Business Development Center. The Center partners locally with Northeast Texas Community College. A group effort was put together to discover a grant that would meet the community needs of Morris County. They settled on the Collaborative Approaches to Well-Being in Rural Communities funded by The Hogg Foundation for Mental Health. The grant proposal, written by NTCC’s former dean of Allied Health Sciences, Dr. Shannon Cox-Kelly, was accepted out of over 60 submissions across the state. The Morris County Collaborative is one of five non-profits awarded $410,000 each to create or build on an existing community collaborative. In addition to NTCC, the Collaborative is partnering with Dangerfield and Pewitt ISD, Titus Regional Medical Center, Texas Department of Health and Human Services, Ounce of Prevention and various agencies that advocate for community health and well-being. The grant was funded under the fiscal sponsorship of NTCC. Northeast President Dr. Ron Clinton appointed Jeff Chambers, vice president of administrative services, and Dr. Jon McCullough, vice president of advancement, to administer the grant funds.

According to Clinton, Morris County is ranked 235 out of 242 Texas counties on overall health outcomes by the Robert Wood Johnson Foundation. He said the grant would be used to support collaborative approaches to well-being in the rural community. “The Hogg Foundation for Mental Health’s grant funds allow us to build upon the Morris County Collaborative to strengthen efforts in our community to support resilience, mental health and well-being,” Clinton said. “A cornerstone of the Hogg Foundation’s guiding principles, we will ensure that historically excluded and underrepresented populations are included in this community-driven process.” Austin said the plan is to use the resources from the grant to reach out to people who live in the area and bring them together to make a difference.

“Some members of our community have held the belief that things can’t change. We want to dispel that belief,” she said. “We want to hear what the community wants and needs. And if people feel that way, we want to hear what will make them feel content in their own lives, what will create that feeling of being grounded emotionally, mentally, socially, spiritually and equality.” Susan Wolfe, Ph.D., community psychologist and partner of the Collaborative, has been meeting with citizens and board members to facilitate a baseline survey of the community’s needs. The survey will be completed by residents of Morris County in order to get an understanding of the necessary resources needed for the area. Wolfe will be providing ongoing support, evaluating the processes, outcomes and providing Capacity-Building training.

The survey will be distributed from mid-February until mid-June 2019. NTCC Phi Theta Kappa adviser Dr. Melissa Fulgham will help organize the first launch of the surveys, which will be distributed by PTK students. Fulgham said students Jazmin Garcia and Andrea Reyes will translate the survey into Spanish. Carmen Shurtleff, associate faculty for social work, and students from the social work class will also be assisting with the surveys. The current goal is to reach at least 1,200 residents of Morris County, which is expected to offer a solid sample of people and their needs. Austin said they are encouraging everyone, including young people over the age of 18, to complete the survey and become involved with the Collaborative and its mission to bring change to Morris County. “I watched our kids standing on the street, instead of being in high school or college,” Mims said.“I have nine children and 22 grandchildren, and I want our children to have better. It’s time to wake up and realize it’s not about race, it’s about our community.” What started as a simple grassroots effort by concerned citizens, turned into hope for the rebirth of Morris County. “This is the time for re-imagination,” Austin said. “We want them to attend meetings, join our committees and the board, bring their ideas, share experiences and share successes. Then they have a voice. Then, together, we can create the change we want to see in our community. That is the only way to create change that is good for everyone. We all have a voice in this.” For more info on the Collaborative, contact President Randy Seybert, rlseybert@aol.com, 903-238-5079 or Beverly Austin, baustin@ntcc.edu, 903-434-833, or online at info@morrriscc.org, https://www.facebook.com/morriscountyco.