The men’s Eagle soccer team won the Region XIV Semifinal game on Saturday against Laredo Community College with a 2-1 victory. The game started out even with both teams creating opportunities on goal. In the fifteenth minute, Laredo was able to take the lead early in the first half. Three minutes later the Eagles tied the game off a goal from Corey Irvine, when the referee called a penalty kick for a handball in the box. A few minutes later the Eagles took the lead in the  when Karim Diao found the back of the net with the assist coming from Ronaldo Brown. Eagles went into halftime with a 2-1 lead.
The second half started with Laredo coming out strong looking to tie the game up. The Eagles were able to withstand the pressure from Laredo, settle the game down, and create a few chances on goal themselves. When the final whistle blew at the 90th minute mark the Eagles sealed a trip to the next round of playoffs with the 2-1 win. The Eagles will be traveling to play in the NJCAA South District Championship against LSU Eunice. 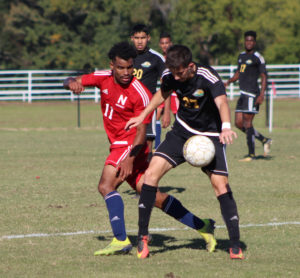