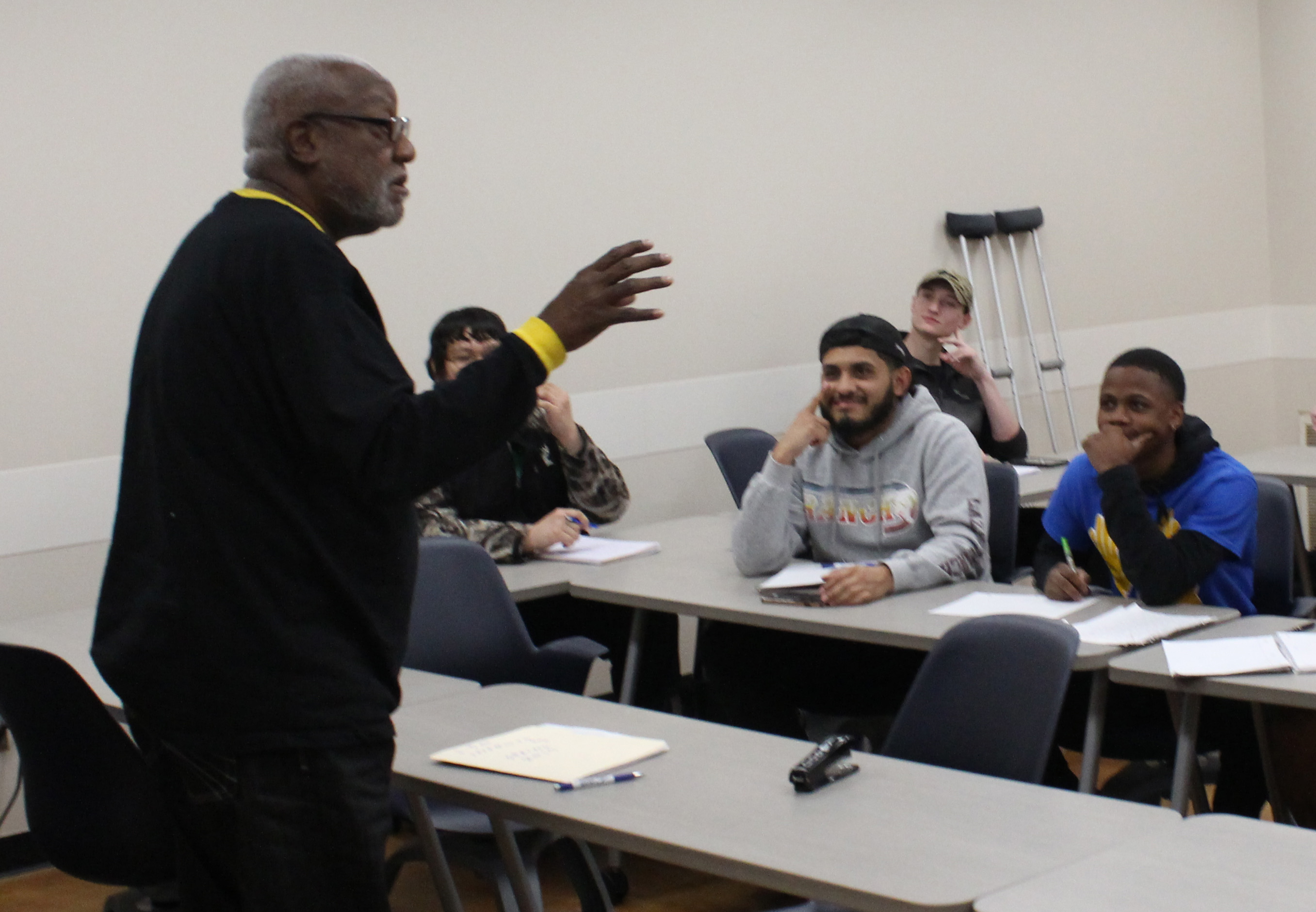 Doddy teaches students during one of his recent sociology classes. The professor has been teaching at NTCC for more than 20 years.

It was the summer of 1963, only months prior to the assassination of John F. Kennedy in Dallas, Texas.

Just two hours down the road in Cason, a young Windell Doddy and his brother peeked out the window of their home, eyes transfixed on a white man stepping from his car and approaching the front door.

Introducing himself to Mrs. Doddy, he told her that he was a salesman for Encyclopedia Americana.

“For only $39,” he said, “your young men would have the knowledge of the universe at their fingertips.”

Out of all the moments Doddy went on to encounter, this was one moment he would never forget. All because of two words. Young men. Never in his nine-year-old life had he ever been addressed as a young man.

Mrs. Doddy agreed to the salesman’s persuasion, and only a week later, young Windell had read from A to Z. He’s had a thirst for knowledge ever since.

From first to eleventh grade, Doddy attended Central Grove, an all-black school. However, in 1971, at the start of his senior year, Central Grove was integrated and absorbed into Daingerfield High School.

For Doddy, it was what he called a “complete culture shock.” Doddy said there was a belief shared among some in the black population that they were not as smart as white people and they never would be.

But as he sat in class at Daingerfield High, surrounded by white students, he realized that “skin color is no indicator of intelligence.”

When this realization hit him, he said he thanked the Lord for sending him to the school and showing him that “talent is spread equally.”

“I had nothing to do with being black,” Doddy said. “Nothing. And you’re going to deface me and kill me for something that I had no control over? Race is a poor way to judge anybody, because the way you look, the way he looks, the way you look has to do with the fact that your ancestors came from a particular part of the world.”

But thanks to Doddy’s parents, he was taught not to hate those who wrongfully judged him based on skin color.

“The stuff that was done to my daddy when he was coming along was egregious, but he still did not hate,” Doddy said. “He used say treat folks like they treat you.”

Growing up in Cason, post-high school meant either college or taking up a job at Lone Star Steel.

After his parents inspired him to continue his education, he attended Jarvis Christian College.

“You take four years of your life to make the rest of your life comfortable,” he said. “Four years is no time. That is a spec on your life if you live it right.”

While taking his first black history course in college, Doddy began making conscious decisions of his actions. He said one of those moments came one day when he took his Aunt Willy to the eye doctor.  He noticed that the word “white” had been partially erased from the optometrist’s door.

He recalled intentionally walking through it and sitting on the formerly “white” side of the room, despite the fact that his Aunt Willy sat on the other side. Those moments in life reminded him who he was as a person.

After completing his education and majoring in sociology, Doddy pursued a temporary career with a community services program.

But after the job ran out, he went back to get a master’s degree in sociology and counseling at East Texas State University. While walking across campus one day, he ran into one of his former professors at Jarvis, Dr. Lee Hensley.

Hensley had become the academic dean at the school and told Doddy to contact him once he completed his education.

Not long after, he was offered the role of professor at his former college, beginning his teaching career.

A few years later, his mother became ill and Doddy took a teaching position at NTCC to be near her. He has taught at the college for 21 years.

He said his teaching methods originated from his own college professors. In this way, he learned exactly what not to do.

“I think it’s unfair to just assign stuff and not explain it,” Doddy said. “If I just need to read, my friend, I don’t have to be here.”

During last year’s spring and summer semesters, Doddy’s teaching was put on hold when  he was hospitalized and assigned to bed rest after three surgeries to remove an aneurysm in his stomach.

It wasn’t until June that he gained enough strength to walk again.

But in the long run, it was the future that kept him going.

“The motivation was to come back to work and still enjoy what I do for a living,” Doddy said. “Because if I had grown sour, I probably wouldn’t have come back, but I wasn’t sour.”

Delbra Anthony, Northeast Texas Community College’s Administrative Assistant to Humanities, graduated alongside Doddy after the schools in the area integrated.

While she doesn’t remember him from their days at Daingerfield High, her friendship with him at NTCC has significantly grown over the years.

“It’s just one of those close friendships that you make that lasts a lifetime,” Anthony said.

Little did she know during her high school graduation, that she would some day be sitting in a classroom, learning firsthand of the “phenomenal” teaching power of Professor Doddy.

“Everyone should take a class with Windell Doddy because most of the time, the ones who take that first class, will end up taking all his classes, whether they need them or not,” she said.

One student who did just that was Cassidy Holland, NTCC’s Financial Literacy Specialist.

Holland said after being raised in school curriculum that lacked sociological truths, Doddy both depressed and intrigued Holland of the hidden truths of our society.

“You spent your entire life thinking that and then you come to the realization through text, and numbers, and news articles, and history, but that’s not even remotely true.”

Holland said that taking classes with Doddy changed her perspective on how she saw society.

“When Mr. Doddy explained all that to me, that was transformative for me in a lot of ways,” Holland said.

According to Holland, Doddy used to sit on the bench outside the dorms.

Holland explained that, while she never knew his real purpose for sitting there, of all the places to sit, she believed that he knew students would see him and stop to sit and talk.

During her several one-on-one sessions with Doddy, often of which involved tears, he would encourage Holland to act.

“It was never about acceptance of the facts; it was about understanding and your opportunity,” she said. “These facts were an opportunity, not roadblocks.”

Former students of Doddy’s continue to come back to visit with him, thanking him for impacting and even changing their lives.

“You never know the effect you’re having on people until years down the road,” he said. “I have talked to so many young people here in the last number of years about suicide, incest, drugs [like] you would not believe and just feelings of worthlessness.

And for them to remember me and say, ‘Thank you for what you said in class. Thank you for being kind or taking time’ that makes me feel worthy.”