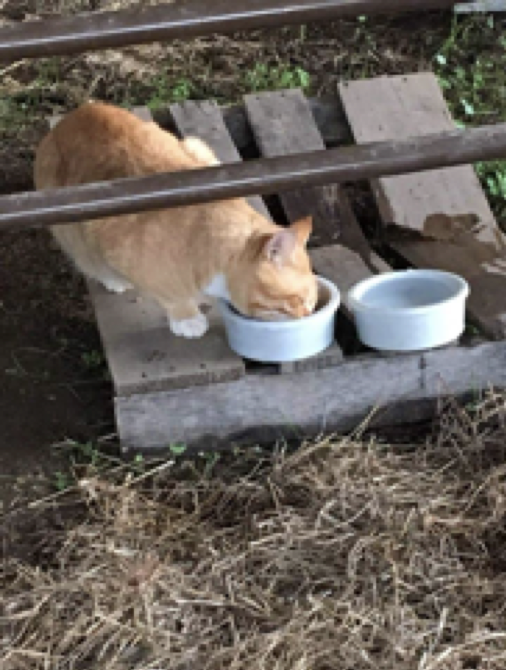 Stray cat living at Ag Complex gets a new home

Bobby the cat has been a resident of NTCC’s Ag Complex for several months. Just recently, Bobby was given a proper home.

Special to The Eagle

Bobby has been living in Northeast Texas Community College’s Ag Complex for months now. But it’s okay, because Bobby is a cat.

The staff at the ranch didn’t mind Bobby, but expected him to work at keeping the grounds clear of rodents. One day, while volunteering on campus with Plant Services, cat-lovers, Joe and Peg Coutermarsh, encountered the thin and hungered cat. Signs pointed to mistreatment in his past, causing him to be skittish around people.

Joe and Peg contacted Sheri Carson, director of Kitty Cove Rescue, for advice on how to approach the reserved feline. Joe and Peg took her advice and returned daily to feed Bobby, or Bob for short. For the first month, they waited for him at the fence row by the woods where he would finally make an appearance and cautiously wait for his meal to be served.

“We extended an offer of some cat food to him as he hunkered in the trees and bushes,” said Coutermarsh. “He would only come out to eat after we walked away. It took another month before we could touch him and earn some trust.”

After being shown so much kindness, Bobby started hanging around the outbuildings and coming out in the open more often. Wormer was snuck into his food, helping him regain his shape, and when the weather grew colder, Joe and Peg made sure Bob had a warm place to sleep. Eventually, it only made sense to adopt Bobby.

But first, he had to be captured and transported to the vet for vaccinations and neutering before being adopted. The plan was to transport him immediately from the vet’s office to his new owners. Two attempts were made to get Bobby into the large carrier he had become accustomed to sleeping in, but Bobby had to have things on his terms.

“I thought maybe I could get close enough and use one of my nets on him,” Carson said. “It worked on several true feral cats, why not Bob?”

“I was an unknown to him,” Carson said. “Even with Peg nearby, he refused to let me near him.”

Fortunately, the Bobby was captured the following morning. The day of Bobby’s procedure the vet informed them that he tested positive for FIV or feline immunodeficiency virus and asked if they wanted to go ahead and put him down. Carson knew it wasn’t her decision to make, so she called Peg. If they decided against the adoption, Carson was confident that she could find someone else to adopt Bobby.

“They did not know anything about FIV.  I gave them some websites to look at and to think it over. When they understood there was no special treatment time intensive care necessary, they felt better about it. I just told them to be careful of infections and be sure they’re treated,” said Carson.

Bobby has settled into his new home with his new owners who said, “He talks a lot,” and “He likes to be petted while he eats.”

Joe and Peg are happy to be able to find a home for a wonderful cat such as Bobby, and encourage others to help animals anywhere they can. “We just want all of you to know that you too can make a difference in someone’s or some pets life if you want too.”

If anyone would like to get involved with Kitty Cove Rescue while attended NTCC, you can learn more about them by visiting their Facebook page or contacting Rico Willis Director of Student Activities.