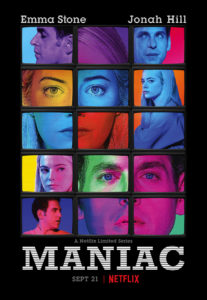 Don’t miss out on this one. Netflix’s new series Maniac is like eternal sunshine stuffed in a bag of imagination.

Each of them have different motives for participating in the experiment.

Owen, the fifth son of a wealthy new york industrialist, deals with both family struggles as well as mental issues.

Owen is a schizophrenic and mentally incapable of seeing what is real and what is not due to his hallucinations. He believes that everything in the universe has a pattern, and possesses important information that will help in his mission to find his purpose in life.

His imaginary brother, Grimsson, appears frequently to tell him what he needs to do in order to complete his mission.

Annie, on the other hand, is an aimless soul trying to find a way to rid herself of the guilt she feels after the death of her beloved sister, Ellie, who died in a car crash.

In an attempt to finally get over her grief, she blackmails her way into the trials. After her doctor prescribes her the “A” pill that lets her mentally revisit the final moments of life with her sister, she becomes addicted to the medication.

Although there aren’t any flying cars in this series, you can easily tell that it is definitely set in the near-future. All the robots roaming around are a dead giveaway that Maniac takes place in a futuristic atmosphere, yet much of the technology looks like the show could be set in the ‘80s.

The company running the trial, known as NPB, is a Japanese biotech company trying to unlock the human mind and human behavior. In order to do so, they give the participants special pills to help unleash their true potential.

Although everyone is always kept separate from each other in their own dreamstate, Owen and Annie always end up meeting at some point.

The 10-episode series uses a lot of creative freedom and causes you to really wonder what is going on when you see these characters going through their various trials.

Their experiences bring the viewer into these wild, inner worlds that end up being truly imaginative and take one on an empathetic psychological journey.

Maniac certainly earns its place among the best series on Netflix. The show explores the minds of a twisted, high-tech future world where humanity’s greatest innovations and darkest instincts and fantasies collide. This series succeeds in its eagerness to expose unexpected thoughts and ideas to its viewers.