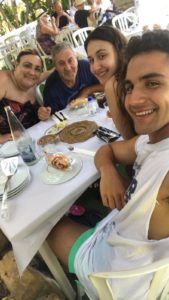 Aitor Granero has been imagining playing for a national championship for years, and last week his dreams came true. The Northeast Texas Community College men’s soccer team defeated Louisiana State Univeristy-Eunice in the semi-finals, sending them to the national tournament in Florida.

Granero, 20, recently, came to NTCC from Malaga, Spain, where soccer had a large influence on his culture. “In Spain, everyone plays soccer,” he said. “I grew up [around the sport] without even noticing, I was already playing. It’s the thing I most like in the world.”

Granero said that he knew nationals could be in his future. And he wasn’t mistaken. “Since the beginning, the coach told us we had a really strong team because we come from all different parts of the world,” he said. “Every single player came with the mentality to win, so that’s what we’re here for.”

Out of all the colleges and universities in Spain, Granero chose to attend one in another country, and he had a good reason for doing so. “In Spain, there is not that connection [between] study [and] sport. You either attend full classes at a university or you are an athlete. Here, I have the opportunity of doing both.”

Granero came to NTCC after Head Soccer Coach Dean Johnson contacted him over the summer with high hopes and big dreams for the fall season. Johnson told him they were going to have a great season because they were putting together a solid team of international players.

“It’s a great honor to be part of this team,” Granero said. “We are mentally very strong as a team, and we know we have a team that can beat anyone in the nation, as we did against Tyler.”

According to Johnson, Granero brings a lot to the Eagle team. “Aitor’s a great player,” Johnson said. “I think he can be a top player. He’s been doing a lot better recently, so I think he’s going to help us a lot when we get down to Florida. He’s a great kid, as well. Got nothing bad to say about Aitor. He does his job in the classroom and does his job on the field. He’s a good person for our program.”

Aside from soccer, Granero also participates in martial arts and boxing, but it’s not very often that a soccer player is also an entertainer.

When Granero came to the United States to play college soccer, he was fresh off the stage at Holiday World, a hotel in Spain where many tourists reside.

At the hotel, he worked as an entertainer performing dances, sketches, prop comedy and lip-syncing. Granero admitted that before he got the job, he “never, never” imagined himself on stage. He chose to be an entertainer because it was fun, stress-free and gave him the opportunity to improve his English.

Before accepting the job, he never planned on becoming an entertainer.

While visiting his mother, who was a hairdresser at the hotel, he was approached by the manager.

A short conversation of “How are you?” quickly led to “Do you want to work as an entertainer?” He said that he was offered the job because he was not shy.

“With 16 year olds, the first thing you think is money [because] you want money for your things and stuff,” Granero said.

While his job was fun and he misses his friends, he said it is his family that he really misses the most. “But with FaceTime…it’s not as bad,” Granero said. He said he FaceTimes his family daily and his friends weekly.

Granero said his most prized memory of his family is the time they traveled to the United States for the first time to go to Disney World, but ended up driving around Orlando lost for hours. Aside from his trip to Florida and his current time at NTCC, Granero has only been to the United States on one other occasion, in which he attended a semester at the University of South Carolina-Aiken. After all his time in the country, he is qualified enough to share his observations of the differences between Spain and America.

“First of all…the culture is very different,” Granero said. “[In Spain], everyone is closer and knows each other more. Here, people are colder. They want the space and stuff.”

Granero said that in Spain everything revolves around bullfighting and football, or soccer as it is referred to in America. “It’s more about rodeo in Texas,” Granero said.

While Texas may not have el matadors, we do have the sport of baseball, which Granero has become quite fond of.

“I love the baseball field [and] the baseball team,” he said. “It is a sport that I have never seen before in Spain, and I loved the passion and enthusiasm of people around watching.”

Another one of Granero’s interests is psychology. After his time at NTCC, where he is currently raising his GPA, he plans to attend a four-year school to continue playing soccer while majoring in psychology. “Since I was little, like 14 or 15, I always had an interest in how the mind works,” Granero said. “I like to understand people’s behavior, why they behave different.”

Granero said he plans to establish his career in the United states because “there are  a lot of opportunities here.” But he also said becoming a psychologist is a backup plan, because his overall goal is to play soccer professionally, preferably for Barcelona.

“My number one dream since I was a kid is to be a professional football player,” Granero said. “But I’m going to give 100 percent, and what God wants, I will be, I will work as that. But we have to sometimes be realistic. Sometimes it doesn’t happen, it’s very difficult, but I’m going to be there. I am going to create the circumstances and the opportunities will come.”