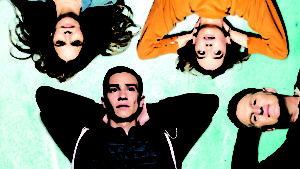 Sam Gardener and his family pose for the cover of Atypical, a Netflix original series about Autism Spectrum Disorder.

Netflix recently released season two of their original series Atypical. The show revolves around Sam Gardner, a high school senior with Autism Spectrum Disorder (ASD) who has decided to enter the world of dating.

ASD, formally known as Asperger’s Syndrome, is a disorder that affects one’s ability to socialize and communicate. According to The Autism Society, the biggest difference between autism itself and ASD is the “less severe symptoms and the absence of language delays.”

Sometimes directors or producers of television programs or movies will add or remove facts about a subject such as autism.

This seems to be the case with the storyline of Atypical. As an 18-year-old with high-functioning ASD myself, I can admit that the majority of Sam’s lesser autistic characteristics are accurate.

The biggest fault with Atypical is that, while ASD is an anti-social disorder, Sam’s ability to socialize is out of the ballpark.

The Autism Society states, “Individuals with Asperger’s Disorder usually want to fit in and interact with others, but often they don’t know how to.” Sam on the other hand seems overly social and wants to begin dating, which doesn’t seem accurate.

I noticed several other flaws as well, such as how Sam speaks with the complete lack of emotion to the point that he seems robotic.

I also noticed that, while people with ASD do tend to have obsessive interests in particular topics, Sam only has one interest: Antarctica.

Throughout the series, Sam is always relating his problems and the problems  of his family to polar bears, penguins or other arctic  animals.

Other than these few things, most of Sam’s qualities are accurate. In the second season, Sam attends an ASD group therapy, and throughout these scenes, you can see that each of the members have a different personality, which testifies that there is no one personality for someone on the spectrum.

One particular attribute in most ASD people is hypersensitivity. This is why Sam wears headphones because he is often overwhelmed by loud noises that others wouldn’t find troubling.

I can relate to this myself because almost anywhere I go I have to wear headphones. It’s a way to block out the sounds of the world and just focus on my thoughts.

When it comes to the communication aspect of ASD, it can be difficult to understand the emotions and feelings of others based on the tone of voice or nonverbal signs.

Because of this, it’s not uncommon for someone on the spectrum to be a little too honest, to the point that it’s offensive.

When I was in high school, my friends helped me to realize what’s offensive and what’s okay to say, although I’m still working on it. Unfortunately, Sam does not have friends like mine.

People with ASD also like patterns and order. In one particular scene, Sam invites his girlfriend, Paige, over to his house. When she enters his room, she comments on its messiness and that it isn’t organized.

But in Sam’s mind it is. He has it organized in a way he likes, but Paige goes around touching and rearranging everything, completely disrupting his system.

As she is leaving, she says, “I refolded all of your socks in a totally better way.” This is something that people with ASD dislike.

They have a system and it needs to stay that way because they hate change. They know what’s best for each of them individually, even if it’s total havoc for others.

One of Sam’s attributes is something that I can deeply relate to. In one of the episodes, Sam’s sister Casey says, “You have got to stop listening to other people. What do you want to do?” Sam contemplates the question, and when he doesn’t have an answer, ask, “What do you think I should do?”

I cannot even begin to explain the number of times I have stood at the cash register for 10 or 15 minutes just to order something simple like ice cream because I couldn’t decide.

When someone on the spectrum asks for your opinion, it’s most likely not because they’re curious. They’re asking because they don’t have one, so they need yours to fall back on.

People with ASD can easily be upset by minor things. At one point in the second season, Casey placed Sam’s toothbrush in the wrong hole in the toothbrush holder. Sam’s response to this harmless joke is to lash out at her.

Overall, the series is an interesting watch because it not only focuses on autism, but scandal, love triangles and peer pressure. I recommend that everyone give this series a chance, but as a fair warning, don’t rely too heavily on the “educational” value.