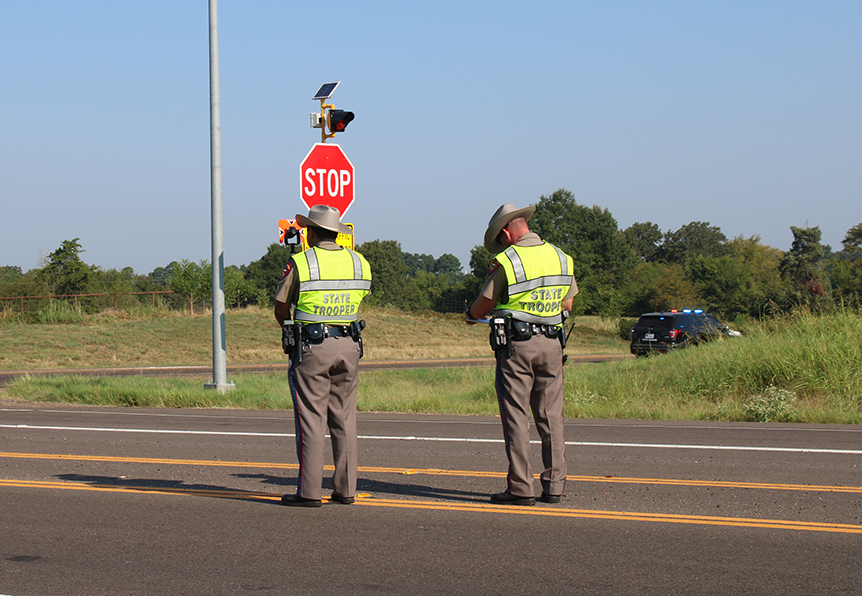 Awareness is key to road safety

Texas State Troopers observe and mark the skid lines of the recent collision of two vehicles at the intersection of FM 4000 and 2348.

Hundreds of students, parents and teachers make their way to and from Chapel Hill school campuses and Northeast Texas Community College every day making 1735 one of the most heavily trafficked farm to market roads in the area. This causes concern for the large number of NTCC students who travel the road. To add to this, 1735 is a two-lane highway with no shoulders, no median and a 60 mph speed limit.
According to the Texas Department of Transportation website, 599 fatalities occurred on Texas farm to market roads in 2018. TxDOT’s website also reported that the peak age of driver fatalities last year was between the ages of 18 and 28; in other words, college-aged drivers.
On a typical weekday, drivers headed to the college will often pass a Titus County sheriff’s deputy or DPS officer parked alongside the roadway keeping an eye out for school zone-speeders or other traffic law-breakers.
Titus County Sheriff Tim Ingram said he tries to station his officers outside Chapel Hill school as often as possible. He added that this plan of action is an attempt to prevent accidents “just by being seen.”
“Most collisions are because someone broke the law,” Ingram said. “…we have traffic laws to enforce them in place, and if you don’t break those, well, we wouldn’t be having collisions.”
TxDOT also reported that “701 people were killed in crashes occurring at intersections or related to an intersection in 2018.”
Unfortunately, this was the case late last month on one of the main roads leading out to NTCC. On Aug. 21, a driver was killed in a vehicle collision at the intersection of FM 4000 and FM 2348. According to a story on KLTV, the incident occurred after one of the drivers failed to stop at the posted sign.
The route to NTCC consists of several different intersections. One risky crossing that many students say is difficult to maneuver is the intersection at US 49 and FM 1735.
Student Kameron Kelley travels through at least one or more of the intersections on his way to campus. He said he thinks that the design of the intersection on Hwy 49 and FM 1735 is especially unsafe. Kelley also said he would like to see some type of light system put up at the intersection where the recent wreck took place on FM 4000.
“In the evenings coming to this class is not too terrible, but when there is school traffic right there at Chapel Hill it is really bad,” Kelley said. “You have people who live right here on the road, and they are stopping and trying to turn out. Then, you have the cars you are meeting in the school traffic and there are a million cars trying to turn in right there at Chapel Hill. There are just too many cars and too much traffic for this little bitty road.”
NTCC President Ron Clinton said the college has worked with TxDOT over the years, mainly discussing ways to possibly improve FM 1735. TxDOT has proposed a plan to widen 1735, with construction expected to begin sometime in 2020. The recent collision that resulted in a fatality, however, has emphasized the idea that something needs to be done to create a safer intersection at 4000 and 2348.
“We have a lot of students who come out on these roads to the college,” Clinton said. “And, we are out in the country. But, because of the volume of students who come out here, we’re going to continue advocating for widening the roads and doing whatever we can to make sure they’re safe.”
Ingram warned drivers to keep their attention on the road, with their hands on the wheel and to stay off their cell phones.
“That is one of my biggest things,” Ingram said. “That is as bad as drunk driving, trying to use a cellphone when you’re operating a motor vehicle. Stay off and wear your seatbelt. I am a believer in seat belts, they can save your life.”
The sheriff also advised drivers against speeding, adding that surpassing the speed limit normally only gets a driver to his destination a few seconds faster than those who obey the rules of the road.
“It’s just not worth it,” Ingram said. “It’s just not worth causing an accident. It’s not worth getting a ticket and causing your insurance to go up.”
Driving too fast on a regular road compared to breaking the speed limit in a school zone is not even remotely similar in the eyes of law enforcement. Ingram said they do not issue warnings when someone is stopped for speeding in a school zone. Drivers will be ticketed and face twice the fine.
“The reason we’re out there a lot is because we do care about our school kids, and we’re out there for their safety and the safety of the citizens that live out in the area,” Ingram said. “We’re just trying to remind you, ‘Hey, you’ve got to obey the law, you need to slow down,’ because we do care about these people.”